Drawing Architecture, balancing on the shoulders of giants

‘Drawing is a way of thinking. To me drawing is not making pretty things or making representations. It’s not representing anything; it is the incarnation of the thing. I’m trying to make it real. And the only way it can be real is through my drawings.’ in The Architectural Review, Peter Eisenman talks to Iman Ansari, May 2013, pg. 80

In pursuit of Drawing Architecture I, this studio methodically investigates the ‘gesture of Architecture’ through drawing. In analogy with the thinking of the philosopher Vilem Flusser, ‘gestures’[1] indicate a positioning in relation to a given concept, theme and medium. The gesture of architecture relates to the positioning of architecture, but the term ‘gesture’ is also intimately connected to the movement of the human body (including any instrument connected to it), and the body’s relation to the space it resides in. Gesture has durational aspects in its understanding, it entails durational (time related) experience within space.

In this studio, each student produces intense site readings through drawing, film making (animation) and model making, to understand and deepen the spatial implication of such a gesture in architecture. While navigating in a production process between drawing and editing the drawings together in film, the student will develop spatial concepts into architecture projects that can range from an in-depth conceptual /political exploration to the design of a building positioned in a current world.
We start with a number of contemporary socio-political situations articulated in film fragments, photography and texts. What can the gestures of these film fragments mean to us as an architect? The chosen film fragments and their social-political background are considered your site and the basis for spatial design narrative.
The architecture projects derived from these drawn readings. The projects materialise experiential information in the drawing, characterised by the inter-relationship between the body and the physical, political or conceptual environment it moves in.

The Drawing Architecture II studio uses design methodologies through drawing to explore and understand how gestural knowledge can be mediated in de production of architecture. This is not a problem solving studio, we rather explore the extent to which we can incarnate an experience or thinking in an architectural drawing.

Image source: Lebbeus Wood, War and Architecture, The UNIS twin office towers, attacked in 1992, and burned. The buildings’ structural and floor systems survived and were suitable for ‘radical reconstruction.’ The new types of office space will be used in ways that will be unique to the post war conditions. New types of spaces woven into the surviving Cartesian structural frame, create a dialectic between timeless and time bound, a network of the unknown that inspires both dialogue and innovation Source: https://lebbeuswoods.wordpress.com/2011/12/15/war-and-architecture-three-principles/ 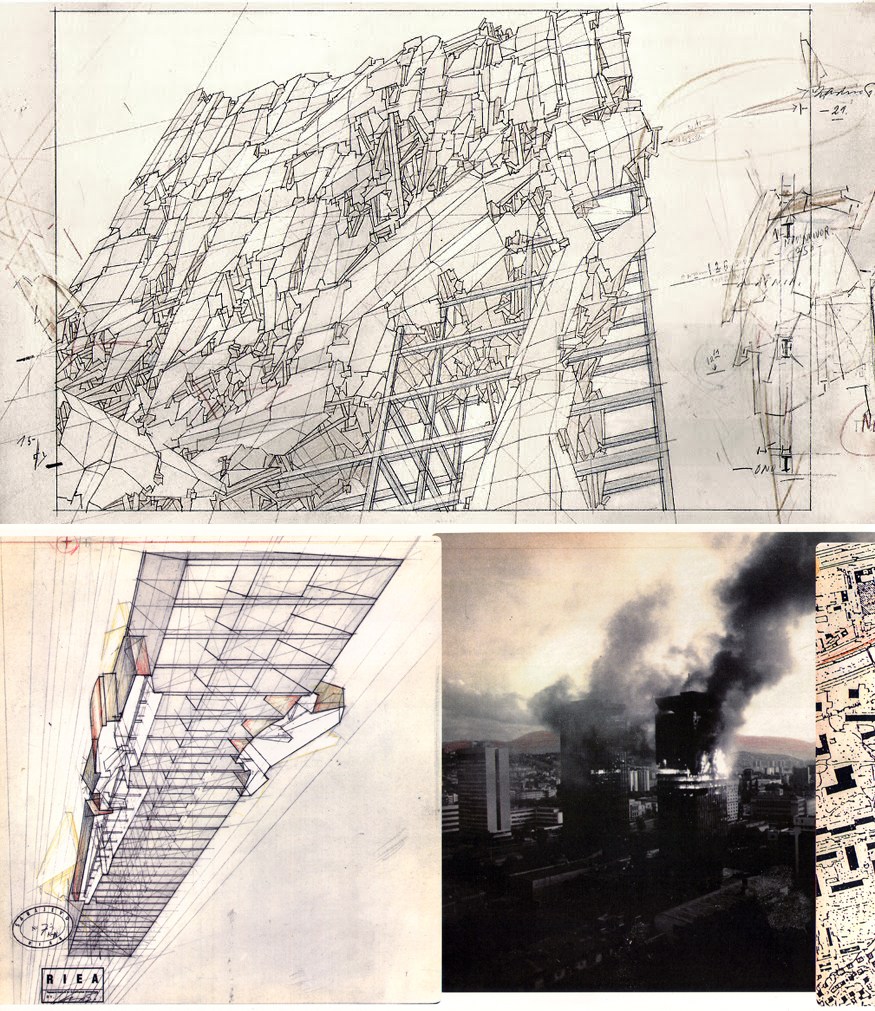 Dear colleagues and friends, The students, Riet and Mira wish you the best for 2020! We friendly invite you to come to the public presentation of Drawing Architecture II on Tuesday January 7 2020 at 6:30 pm in the Sint-Niklaasstraat, 9000 Ghent. Mira Sanders & Riet Eeckhout