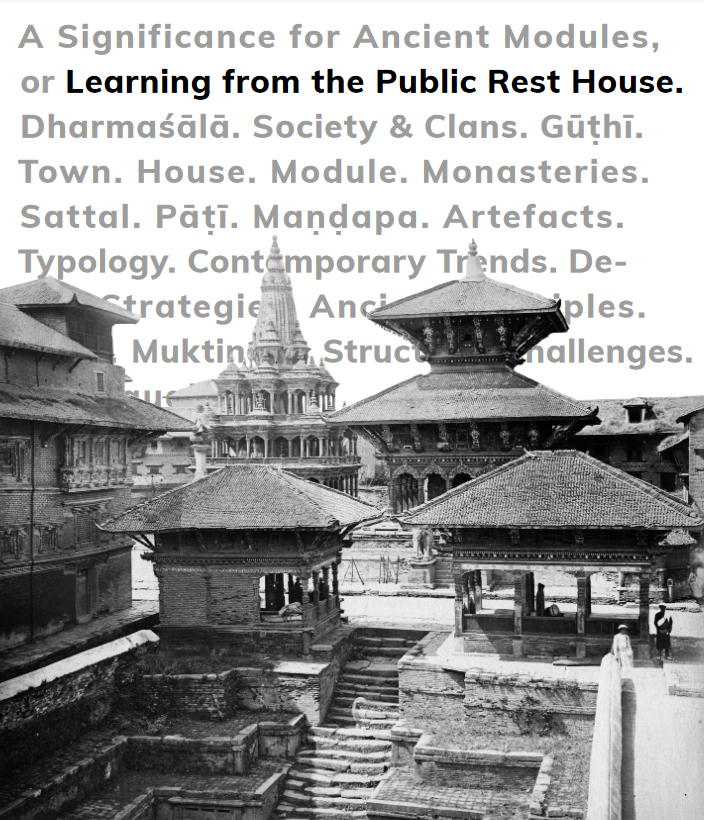 Dharmaśālā: A Significance for Ancient Modules.
Or: Learning from the Public Rest House.

This master’s thesis was prepared within the framework of Studio Nepal which encouraged us to study living traditions in Nepal. Based on this study, it was required to develop a design strategy and apply it to two sites.

During my trip to Nepal, I spent most of my time visiting the Kathmandu valley and its rich heritage. A peculiar kind of artefacts caught my eyes and my interest: the Newar public rest houses – dharmaśālā. In 2020, five years after the last earthquake, many reconstruction works were still ongoing, and I could visit some rest houses being reborn.

I spent a week on Teeka Bhattarai’s starting permaculture education farm in the mountains around Kathmandu. This became my first project site. The second lies in side valley of Mustang, in very different climatic and topographic conditions.

But, before designing, I needed an understanding of time, place and sociocultural context of the future projects: not present one, but the long-running tendencies that shape places and societies. I thus went on an in-depth study of the Newar society and its typology of rest houses: from the smallest, most common and most accessible subtype pāṭī, to townhall maṇḍapa and the larger sattals, real public homes. Public rest houses stem from an understanding of the city as the backbone to interaction with the cosmos and consecrates the town as a common good.

Their architectural principles, based on an ancient unit and simple modules, provided strong incentives for my designs and made me rethink the divide between inside and outside, between open plan and private spaces, and between necessity and luxury.

Public rest houses might be disappearing nowadays, with a westernization of the Newar society. My research and projects intend to open essential insights for a continuation of these building practices in contemporary architecture.