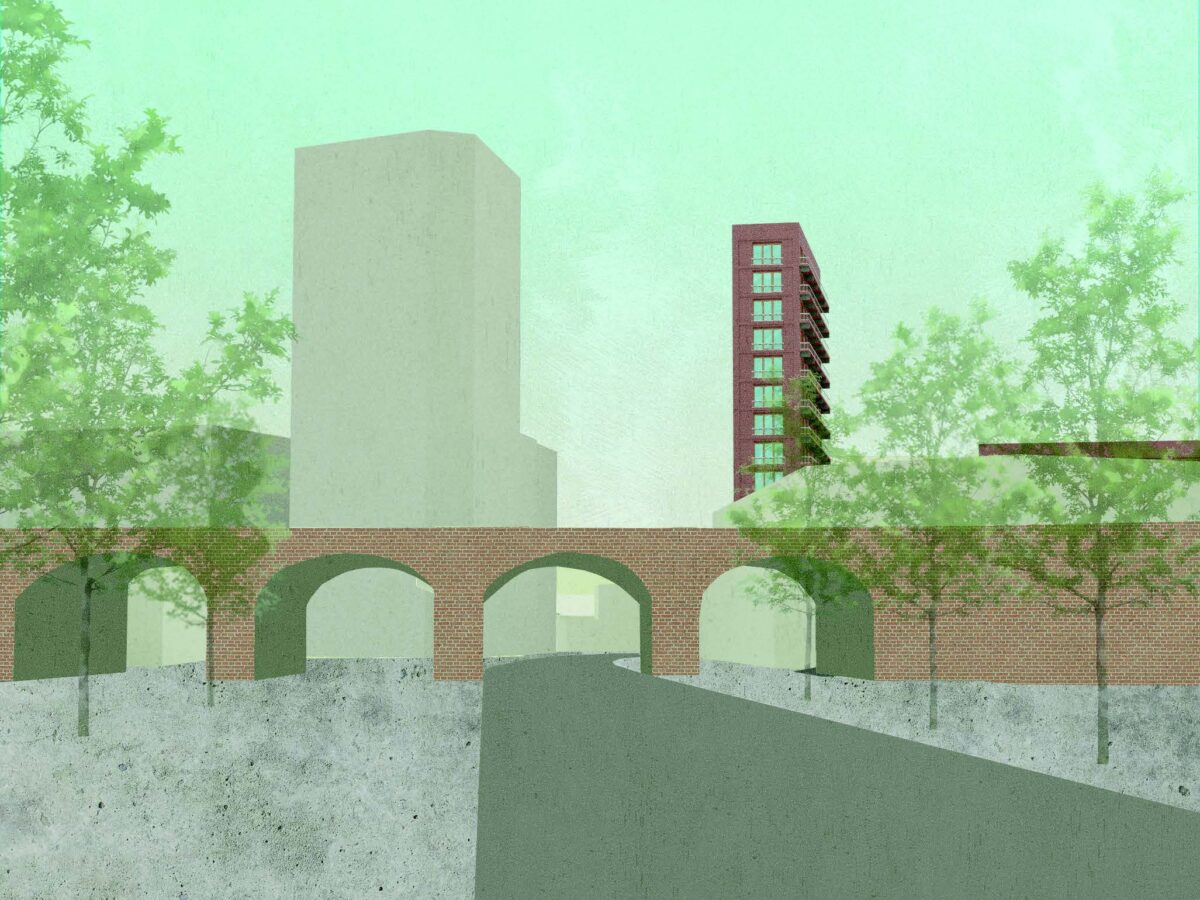 The site is situated southwest of Gare du Midi in Bruxelles. Originally a factory site, now a collection of solitary office buildings, a hardware store, smaller productive activities, and a logistic hall of Proximus – the biggest telecommunications company in Belgium. Urban strategy for the site focused on creating a streetscape connecting the city to the Senne with a traditional hierarchy of streets. But very importantly still keeping the productive activities necessary to the city. This became the framework of the design project, which focused on the logistic hall.

The project aims to offer a pure architectural solution in a very constrained situation. The design proposal starts with the idea of keeping the entire structure of the existing logistic building, in other words not changing the surface area and the volume of the building. Four new volumes are added, a thin tower, an extension of the groundfloor with stairs accessing the rooftop, a long residential building on top of the extension, and a long wooden hall with covered open-air spaces at both ends.

The composition of these volumes creates an inner courtyard on the rooftop area. But this is not a closed courtyard in the traditional sense, anyone can enter and is encouraged to do so. The difference is in the level of scale, intimacy, and safety. The courtyard is a quieter and calmer place than the dynamic productive street below. The traditional private-public dynamic is disregarded. All the spaces are interpreted as collective spaces. “Collective spaces consist of multiple collective levels that are defined by as many territorial boundaries. Some of these levels belong to an intimate sphere, others provide a high exposure, some of them can feel safe, others embody threat or danger.” Yet every aspect of the concept is questioned in its pros and cons. An example: The first floor with parking is demolished, as a 2,3m high

space doesn’t bring spatial quality and by demolishing this floor the rooftop becomes lower and thus more accessible. This becomes a very strong argument for not keeping this specific part of the existing structure. And yet most of the existing situation is kept, which creates very strong limitations to the design solution. These extreme constraints can bring new unique spatial formations and qualities. The thin tower, for example, uses the remaining 5 meters between the building and the sidewalk as a thin concentrated base with all the collective areas situated there. The residential floors above are cantilevered creating bigger apartments and a transitional arcade zone on the rooftop level. “The question is how you react architecturally to constrains: whether you resist constraints or absorb them in the design and attempt to instrumentalize them.” 2 This can become a strong designing technique, through attempting “to include as many of these things in a difficult whole”, these projects “develop a greater depth and are enriched at several levels of meaning.” Through extreme solutions like this, it is possible to achieve effective usage of spaces in the city with a certain humility towards something without much of an architectural value but with a value for the city nonetheless.