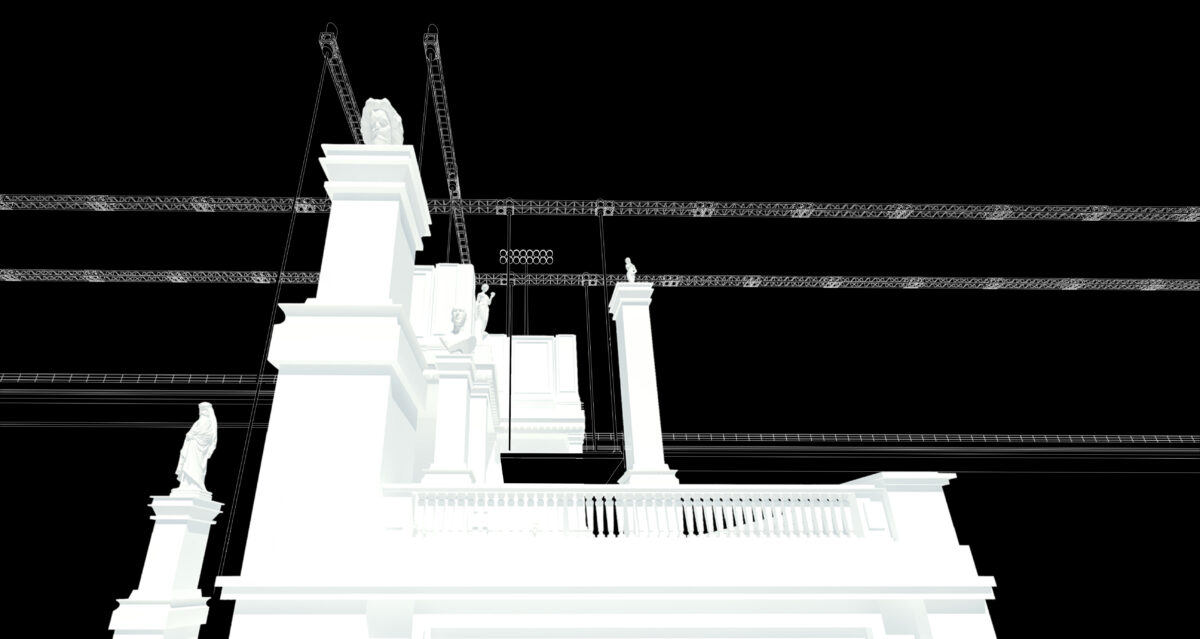 A few images were striking, first of all, the fact that a navigator walks in space with a goal in mind, finding something. Searching and looking. I was primarily interested in le dossier B, a documentary where the protagonist is looking for a connection to a forbidden underground citadel. My interest grew further as I extended my research to other films, such as the disorienting feeling of going through the setting of l’annee dernière a Marienbad and the fly-through camera person in the film Birdman. Moreover, the situational site contained a few principles that I explored simultaneously.

The concept of presence in space
In one of the earlier situational sites, I had edited the queen’s coronation and her effect by merely walking in the church. In his Manhattans transcript, Bernard Tschumi describes that architecture and bodies inside a space alter the balance of the geometric order that is architecture. Walking into a room to find another person has this aspect of things. In both le dossier B and l’Année dernière a Marienbad, there is a particular emphasis on statues and sculptures that I interpret as being present.

A concrete marble statue with frozen expressions permanently occupying the same place plays an intimidating role. The decision to include them in space transforms one’s perception of that space. A third-person view is created when looking at a statue and navigating around it. A perspective similar to the one presented in a video game.

Sequencing and walking
Often, navigation in an unknown space increases one’s curiosity. Specific relations between elements such as a small opening between two walls, a set of stairs, a free-standing column catch my attention. These are elements that I deduced from the films by reconstructing the images I get from a panning shot or any camera movement that conveys the view a person could have. I made sure navigation is a crucial element in the space I create.

Obstacles
Often a fence, a wall, or a closed-door exist to make it harder for someone to enter a
protected area. With some effort, one can breach and enter. These elements are also a clue that hints at the possibility of hidden spaces.

Infrastructure.
The observer notices it and understands its purpose but categorises it as secondary in the register of things he/she perceives.

In between finding my situational site and starting my design, I was in search of a medium. The first attempt was a set of collages that were abstractions taken directly from the film see project book). They served me as a base throughout the project as they were the things that were created entirely out of intuition; they were pure and unbiased.

As the project progressed and I was attempting to capture the films’ environment’s essence, I proceeded by casting my models in plaster. This experiment was formative and definitive since it takes a lot of time to create the cast, pour in the plaster, and take photographs. It consolidated the idea of the elements I decided to turn solid. This medium was limiting. Time was not on my side.

The final experiment was done entirely digitally, and it was able to capture many aspects that happened in my situational sites.

In the end, I realised that a set of clips combined with images with sharp perspective are the ideal way to represent my project.
Infrastructure is expressed with lines and the spatial setting in solid white. This decision was taken to ensure that the infrastructure is visible and noticeable yet remains a secondary element. It also emphasises the fact that it comes from beyond and gravitates towards the situational site.