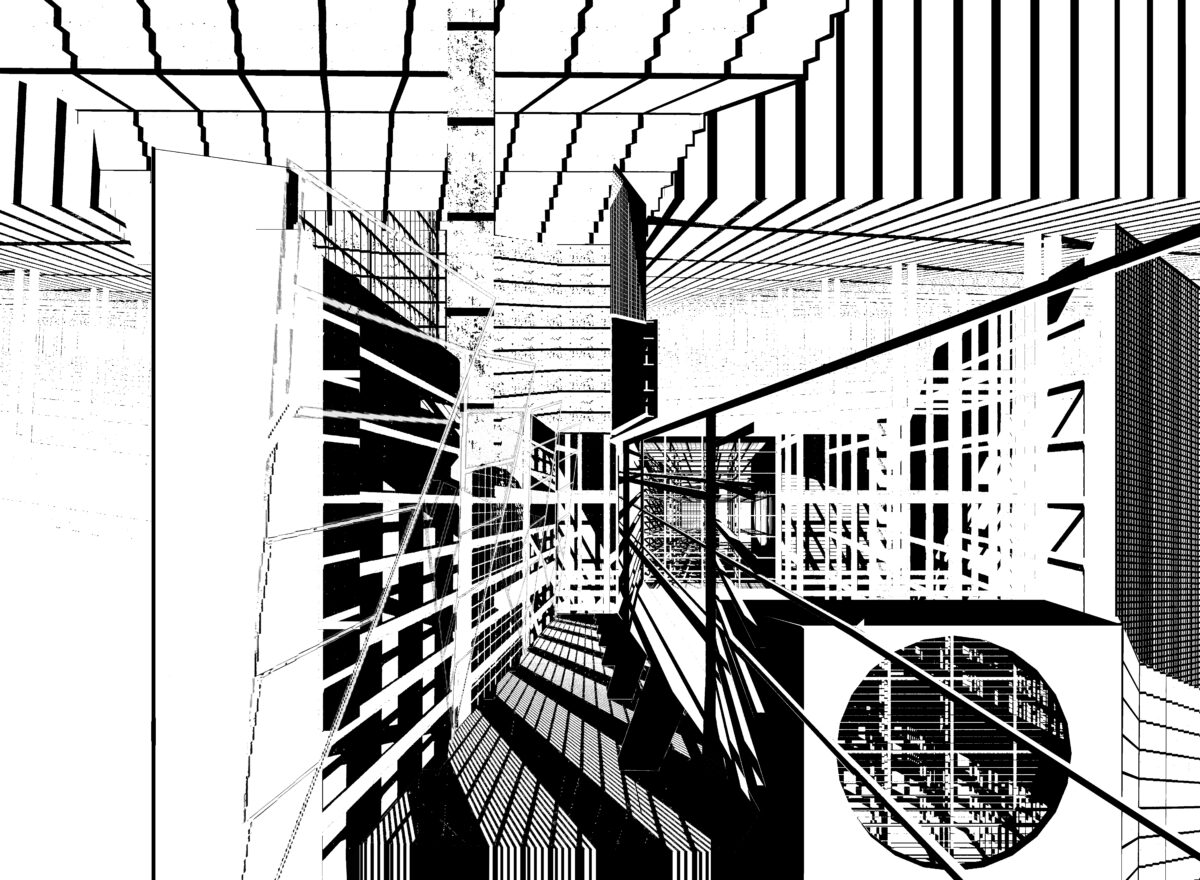 A spatial exploration, based on interest in structures of certain spaces. Structures that give rhythm to space, can also feel disorienting and confusing, if you are looking at it form different angles. A 3D-mapping of some of the spaces explored in a minute film starts to take shape. Which leads to new possibilities of interpretation… The spaces are explored by film in only two colours: black and white. Light, shadow, structure, materiality are shaped into new forms and new things start to appear. They become something new.

These new elements are confronted with each other in collages where a new notion of space can be perceived. Interaction between columns, walls, framework, shadow, perspective… are layered throughout the drawing. But it still leaves a lot of room for imagination, what happens behind certain elements? What is the interaction there? The space starts to shape in a physical model where the connection between elements in drawing become more clear, where the depth of the space can be explored, where light and shadow become meaningful again.

Based on a spatial exploration, where structure plays an important role in giving rhythm and atmosphere to that space. These structural elements make you understand the space to a certain extent, but sometimes it feels disorienting and leaves you wondering what it is you are actually looking at.

What starts to happen when you draw out these spaces as 3D-models and explore them in only black and white. Observing a space that way takes away the grey zone, where we could speculate the most interesting things are happening. It serves as a transformative tool to give a new interpretation of that space. Black and white confront each other in a new way and give a new notion of what is happening within the space. Light, shadow, and materiality leave an impact on the exploration. Shadow becomes structure, structure becomes materiality, light and shadow interact in a new way. The perception of what you see is changed. Structures start to transform and reshape into different elements and so impacting what is, the perceived space. New elements start to appear and leaves you wondering what it could be, what this new space could be. It offers an opportunity to re-imagine the grey space that would normally be present.

Drawings started to develop from the black and white exploration. They are collages of fragments from different spatial explorations. It creates new interactions between structure, light, shadow and materiality. It leads to a new spatiality where the mind starts to wonder how these new interactions work. The drawing shows a complexity of the space, a complexity of interaction between different elements that gained a new meaning due to the black and white exploration. Due to the layering in the drawing you start to understand the space better as it gives you more and more information of the relation between elements and the depth and perspective of the space. Columns, walls, light framework, shadow, perspective and other elements start to react to each other and thus forming a new spatiality. A reframing takes place, putting elements in a new order to give them a new meaning in space. It explores the relation between these elements, a relation that gives shape to space.

As you start to see and feel this relation of elements that leads to a new spatiality, there is still a lot of information hidden that is yet to be uncovered. It makes you wonder if the drawn space could be a reality, if it is even possible to be built? A new investigation starts to unfold, can it be built into a physical model? And can this space be further explored that way? In the physical model new relations start to form between the drawn elements. What happens behind certain architectural elements in the drawing, how do they relate to one another? What is the connection, the relation between the elements that form this space. How does the depth, the perspective and composition of the drawing translate into the physical model. An interaction that would otherwise never take place is formed and given shape within the model.