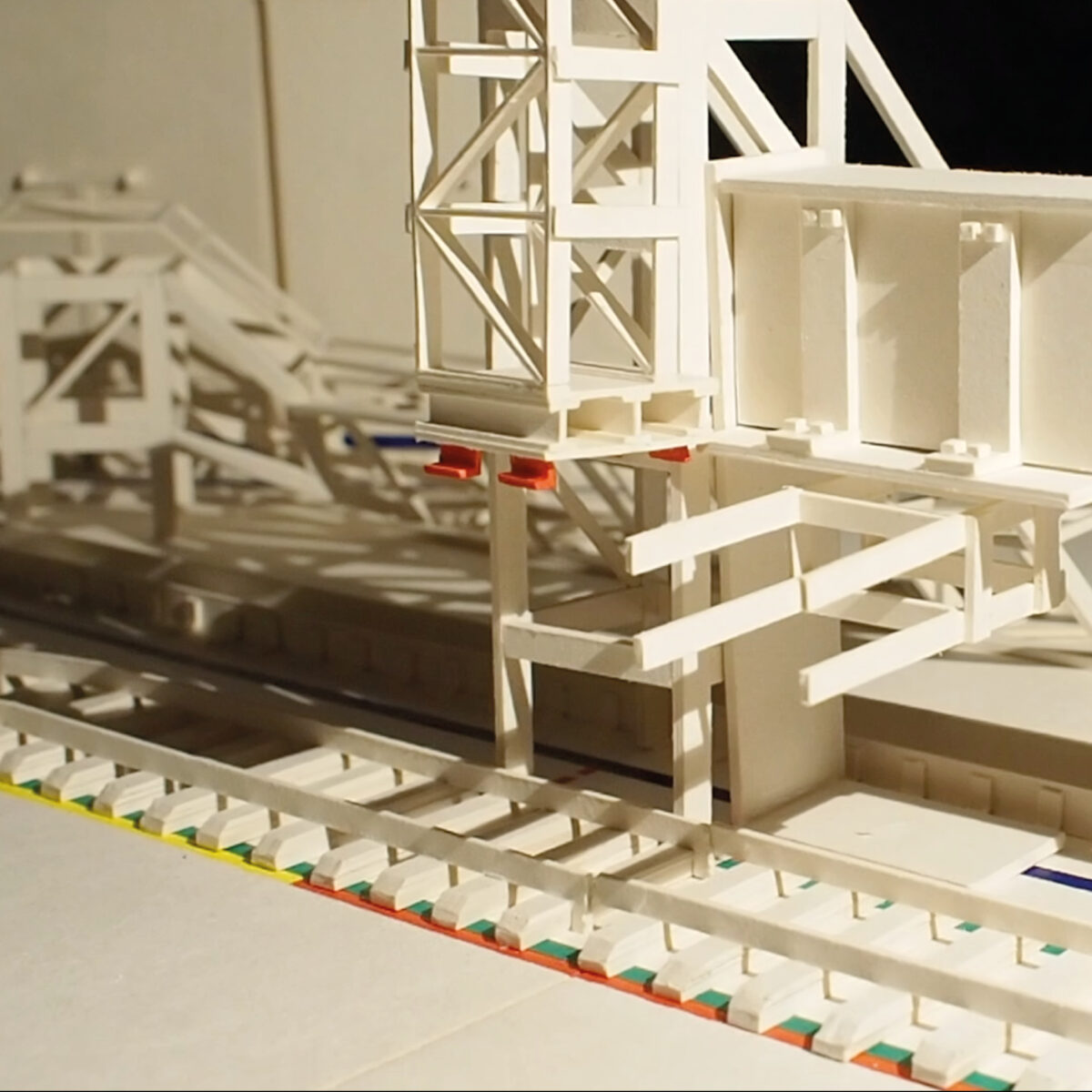 As an intuitive start in the process and research I focused on the architectural sliding element, as ‘the door’, ‘gate’, ‘train’ or ‘cart’ following his track, becoming the guiding protagonist in the narrative. Without knowing what it is, you feel that this dividing element discovers his environment by travelling through inside/outside spaces, through rooms and landscapes and is in his trajectory alternately being watched from a viewpoint on the outside, from on top, from the inside or from underneath it.

In my referential research I focused on the contrast between, on the one hand this IMMERSED and STAGED atmosphere (of W. Anderson’s and J. Tati’s movie-scenography) and on the other hand the FRAGMENTED and TRANSPARENT way of working (of The Woostergroup and M. and L. Francois’ scenography in theatre). In both cases you are watching their story through a clear defined frame.

In Anderson’s stories you are overly guided in your looking. His story is being forced upon you in an obsessively detailed and perfect frame. As the viewer, you only have one way of looking and that is through blindly following whatever the maker emphasizes and enlightens. His guided scenography doesn’t challenge you to search for explanation. He simply hands us the ready-made narrative.

On the other hand, while watching a play of the Woostergroup you have the FREEDOM to fill in what is abstracted or what is not there, by associating and imagining. You have your own personal way of looking and actively searching for your understanding of their story.

As a way to go back and forth between the situational site and the model, I used the FRAGMENTATION of The Woostergroup’s stages and the extraction of dominant information in the making of my PROPS. In their experimental theatre the movement of the props defines the relationship between the objects and the stage. Moving the objects can therefore mean a transformation or evolution of the scene.

In my theatre of objects, these ‘industrials actors’ also gain PERFORMATIVITY by the suggestion of their function or purpose. In the original fragment of ‘Dreamtime’ by Jane and Louise Wilson, the machinery’s purpose remains a question, but their obvious functional character triggers our mind to suggest what they are for. By giving these separate objects a direction and bringing them in a functional relationship with each other, I try to activate the viewers’ imagination and let the objects interact and affect each other.

This MEETING OF THINGS, is where the situation happens. The interdependent objects interact with each other on the place where they come together, they cross or intersect. The space in between the actors and rails is explored by their shadows. They trigger our thoughts, create new spaces and come forward as secondary protagonists expressing the gravity and heaviness of the objects.

Intrigued by these SHADOWS, I came across a new way to let the narrative self-produce, limiting my task as the designer to the mere selection of object-generating shapes inside the frame. The Woostergroup’s abstraction and fragmentation is this time being applied on to the spatial narrative itself, translating its shadows into tangible material and re-scaling parts of existing objects turning them into new ones. After the object is extracted and constructed, it’s given a purpose and gets implemented in the growing industrial trail.

The materialization and heaviness of the objects is translated in and supported by the notion of SOUND. Without having seen the object, we can speculate on its size and weight by simply hearing the noise it generates. Even silence, as the absence of sound, adds information on what is outside the frame and how far or near we are from the objects. Sound can therefore speculate on what is not visible, emphasize what is enlightened and immerse the viewer in the narrative by capitalizing on his senses.

What first entered the scene as objects now starts to act, unfold and organize themself transforming the stage into a machine-driven landscape. The DEPLOYMENT of these separated actors in a RELATIONAL ENVIRONMENT turns it into architecture.