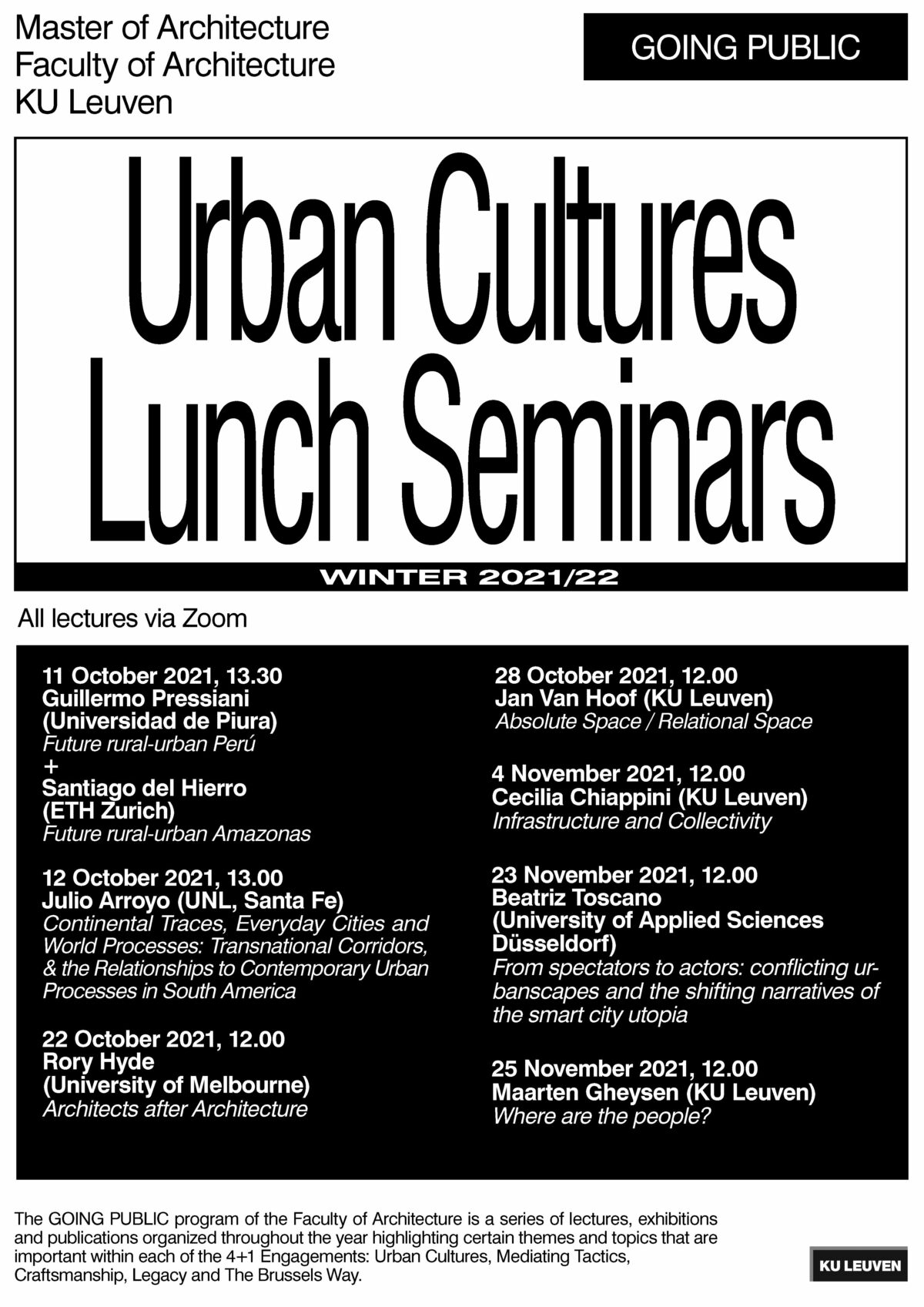 All lectures via Zoom. Please find the links below.

Presentation Santiago del Hierro (Future rural-urban Amazonas): This presentation forecasts a research focused on development initiatives in the Andean Amazon, exploring how design can alternatively engage issues related to resource extraction, the expansion of agricultural frontiers, the encroachment of indigenous territories and contemporary narratives on what a post-development landscape could hopefully look like. Santiago del Hierro is an Ecuadorian architect and urbanist based in The Hague. Santiago holds a Master in Architecture from Yale University, where he attended as a Fulbright scholar, and between 2009 and 2010 was a resident researcher at the Design Department of the Jan van Eyck Academie in Maastricht. Until 2017, prior to moving to The Netherlands, he taught at Pontificia Universidad Católica del Ecuador, where he developed and coordinated the Urban Design Masters program. He has also been a guest professor at the Berlage Institute in Rotterdam, the Escuela Técnica Superior de Aquitectura de Valencia, TU Delft and Fontys University of Applied Sciences. He is currently involved with different teams in research and design projects for Colombia, Ecuador, Ethiopia and Suriname.

Presentation Guillermo Pressiani (Future rural-urban Perú): The theme of this presentation is life in urban environments, from the basic perspective of the inhabitant’s health, and starting from the current available technologies (most of them addressed at Koolhaas’ exhibition “Countryside”). From here, it explores the possibility of slowing down urban sprawl by reinforcing rural settlements, and with this, focusing on the territorial planning of those rural settlements. The presentation will elaborate on a case-study tacked at PR8 (Proyectos 8) design studio at the Universidad de Piura: a rural settlement in the Peruvian Andes that is precarious at first sight, but very powerful when analysed in detail. With references to the territorial dynamics, the focus will be on the impact of social, cultural and economic dynamics on the spatial differentiation at an architectonic scale. Guillermo Pressiani is a Professor at the Department of Architecture, Universidad de Piura, Perú, where he teaches design studio, theory and building. He graduated as an Architect at Universidad Nacional del Litoral, Santa Fe, Argentina (2008); and as a Master of Architectural Design at Universidad de Navarra, Pamplona, Spain (2013), and since 2015 leads his private professional practice, [g+]. Between 2016 y 2018, he worked as a teacher at Universidad Nacional del Litoral, Argentina. He has worked as a designer at renowned international offices such as Machado & Silvetti Associates (USA) and Sasaki (USA). Pressiani has also participated in numerous competitions gaining national and international recognition.

Latin America and the Caribbean define their contemporaneity as territories of deep traces. Their spaces have been conquered, colonized and worded along history, and as a result, one could draw different maps. These maps are made of varied lines and points that represent tensions of displacement and settlement in space and time. Its vast territory is inhabited by more than 650 million people, where living conditions are marked by economic disbalances and cultural diversity. This is strongly expressed in urban life at every imaginable level. In cities, we can experience the multiplicity, and contingency of contemporaneity. Here, certain urban-architectonic processes become crucial to understand architecture, as a crossing point of the micro-experiences of the close everyday life, and the macro-processes of the distant and structural. In this lecture, Prof. Julio Arroyo will address three cases and processes of cities in Argentina. First, Buenos Aires, the capital and header of the waterway Paraná-Paraguay. Then, Rosario, and Santa Fe, the latest, materialising the intersection point between the waterway and the interoceanic corridor between Porto Alegre (Brazil) on the Atlantic Ocean and Coquimbo (Chile) on the Pacific Ocean.

Julio Arroyo is full professor at Facultad de Arquitectura, Diseño y Urbanismo, Universidad Nacional del Litoral in Santa Fe, Argentina. He teaches architectural design in the graduate programme in Architecture and Urbanism (BA+MA). Parallel to his interest in the theory and criticisms of architecture, he currently leads seminars on contemporary urban processes, architecture and public spaces in Argentinean cities. He is the director of Arquisur Revista and he is constantly invited to give lectures and evaluate projects in Latin America, Spain and Portugal. Arroyo holds also his private practice and has worked in the public sector, at Municipality of Santa Fe, for many years equipping him with a multidimensional understanding of urban issues.

Part of the elective course Exploring Architecture. Who Does Architecture, in this lecture Rory Hyde will present research into new models of architectural practice, reimagining the potential of architecture to address major challenges of today. Drawing upon his books Future Practice (2012), and the recently released Architects After Architecture (2021), he will look at inventive organisations from across the world, representing a broad horizon of possibilities beyond the private practice. Ultimately, it’s about asking ‘what is architecture?’ What sits at the centre of what we do? Are we defined by our products – buildings? Or can we reimagine architecture as a versatile way of thinking and acting on the world? Once we redefine our work in this way, where might it take us? What new questions could we address? This lecture will argue that by reframing architecture around our methodology and values, not only can we discover whole new territories of action, we can also reclaim our social purpose.

Rory Hyde is an architect, curator and writer based in Melbourne. His work is focused on new forms of design practice for the public good, and redefining the role of the designer today. He is Associate Professor in Architecture (Curatorial Design and Practice) at the Melbourne School of Design, University of Melbourne; and a Design Advocate for the Mayor of London. From 2013 to 2020 he was the Curator of Contemporary Architecture and Urbanism at the Victoria and Albert Museum.

The seminar focuses on the research that Jan van Hoof is conducting at the Faculty of Architecture, KU Leuven. In his research, he makes explicitly the differentiation between the physical city as infrastructure and the urban life that takes place inside this infrastructure. From this perspective, he investigates approaches to theorize the city based on its urban life and in relation to the process of urban renewal. His research is currently focused on the urban renewal project “Muide-Meulestede Morgen”, located in the city of Ghent, in which he collaborates with various city services part of the city. In this role he conducted research on the spatial use of children, youngsters and the elderly living in this neighbourhood. The results of this research were used to develop an age-friendly recreational structure for this district. In his lecture, as part of the urban culture lunch seminar, he will give an overview of this project and he will discuss his approach in relation to the daily practice of the spatial professional.

JAN VAN HOOF studied Industrial design at the TU Delft (2004), graduated at the Design Academy Eindhoven (2008) and graduated in 2014 as an Architect (Tilburg). Between and after his studies he worked as a freelance designer/architect on projects differentiated in scale between a chair and the city and in collaborations with theatre makers, choreographers, artists, architects, and urban designers. He worked as a researcher/designer the T.O.P office (2008-2009), as an architect for several small scale architectural offices and as a researcher at Endeavour (2016-2019). As part of the Stadsacademie he is coordinating a transdisciplinary project aiming at rethinking urban renewal in Ghent (2020-…). Jan was a visiting teacher at the Academy for Architecture Rotterdam (2018), was leading a design studio at the Academy for Architecture Tilburg (2019-2020) and was assistant teacher in a design studio at the faculty of architecture at KU Leuven (2020-2021). Within the research group Urban projects, Collective spaces & Urban identities (KU Leuven) he organized several electives related to his research.

Glòries is an area under constant transformation in Barcelona, Spain. Over the last decades, several car-oriented infrastructure conforming to a variety of spatial conditions have been built and later demolished. Today, it is being converted into a park. Interestingly, Glòries (wich is a shortening from Glòries Square or Plaça de les Glòries Catalanes) is originally conceived as a square at the centre of the city, the crossing point of the three axes of the Extension Plan (1859). But this square is never completed, and has since been a constant part of the ongoing discussions on infrastructure and urban centrality. These discussions are strongly embedded in changing expectations, and pending implementations. Moreover, they trigger conflictive appropriations of spaces dominated by infrastructure that can be enquired to reveal complex spatial dynamics. The presentation emanates from a recently completed PhD-research that adopts an holistic, multiscale, multidimensional approach, mapping the origins and implications of the infrastructure around Glòries over 150 years. The conceptual framework crosses ‘infrastructure’ with the category of ‘collective spaces’ coined by Manuel de Solà Morales in 1992, and extends its meaning by enquiring the intermediate conditions of inter-temporality, spatiality and territoriality. These are recognised to trigger new kind of symbolic, spatial and territorial dynamics, generating what is here referred to as ‘spaces of collectivities’. The methodological strategy is to investigate this through the dimensions of ‘expectation’, ‘materialisations’ and ‘appropriations’ as notions in tension deriving from the triad of polis, urbs, civitas as proposed by Arroyo (2015).

María Cecilia Chiappini is a Postdoctoral Researcher and Docent at KU Leuven. Architect from Universidad Nacional del Litoral, Argentina (2007); MAS in Urban Design from ETH (2012); and Doctor in Architecture from KU Leuven (2021). She is an active member of the Research Group Urban Projects, Collective Spaces and Local Identities directed by Kris Scheerlinck and Yves Schoonjans.

This presentation proposes a critical assessment of the project of the smart city on the premises of it its plight for a future of perfectly attuned networks of actors and material/informational inputs. Coined sometime in the mid-2000s the term smart city describes urban centres as self-generating systems of logistics, information and resources where nothing is wasted. Overcoming the city of the state- sponsored society, where citizens stand as the recipients of an urban project that is not theirs, in the nearest future, urban inhabitants will no longer see themselves as spectators but as actors: ever involved in smooth and effortless flows of supplies and opportunities for self-improvement, organization and decision-making.
The practices of architecture and urban planning have been prompt in catching up this paradigm. By catering to concepts of so-called autopoiesis and parametricism, they seem to have understood their role in facilitating such interactions. The envelopes and the cores of buildings appear less differentiated. Former car friendly orthogonality gives way to open views and curved plazas. Transparency, cloth and membrane like structures convey the same deregulation and lack of resistance these societies appraise for themselves.
In the face of these predictions for an all-engaging urbanism one question begets. Especially when taking a look at the recent proposal for the transformation of the Karl Marx Alle in Berlin, from former built-in backdrop for ideologically driven parades, into an urban experience of total immersion; how will the actor-network urbanism of the future truly promote a fair share in the territorialities of environmental and social wellbeing? How different is the smart city’s promise to operate as a trans-ideological self-organizing and self-sufficient organism from the programmatic living of former functionalistic state machines?
Focusing on the specific case of Santiago de Chile, this will be an examination of architecture and urban design as the renditions of societal utopias on historical and sociological terms. Followed by a debate with students.